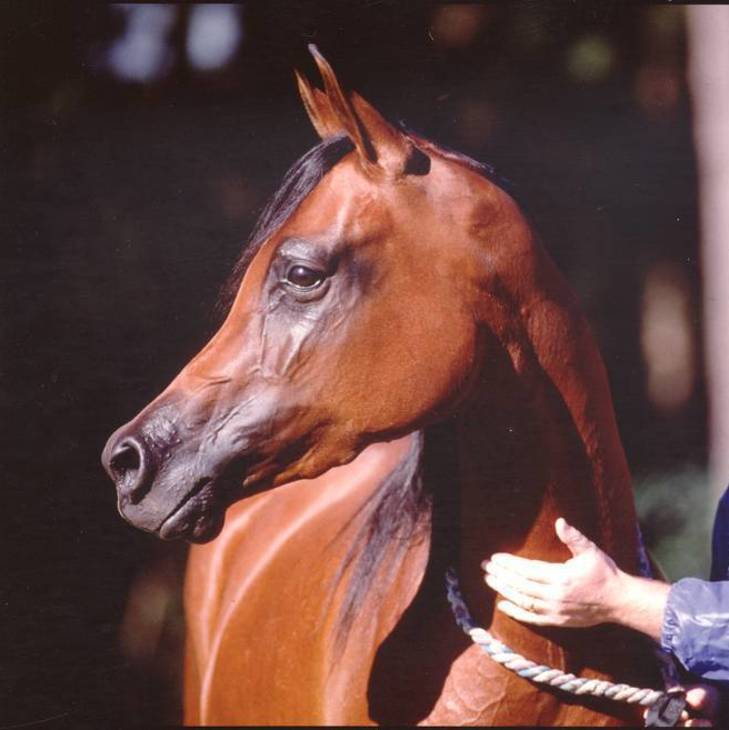 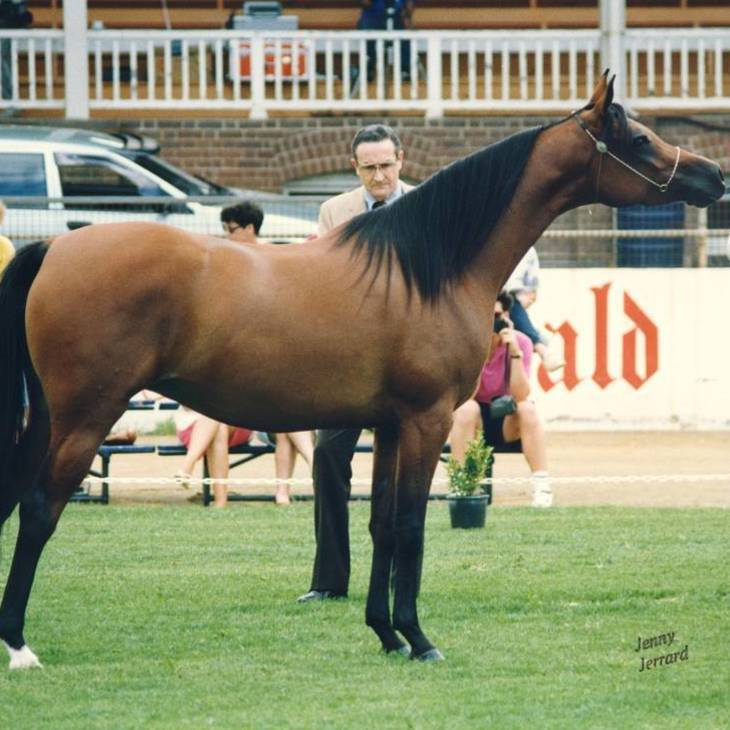 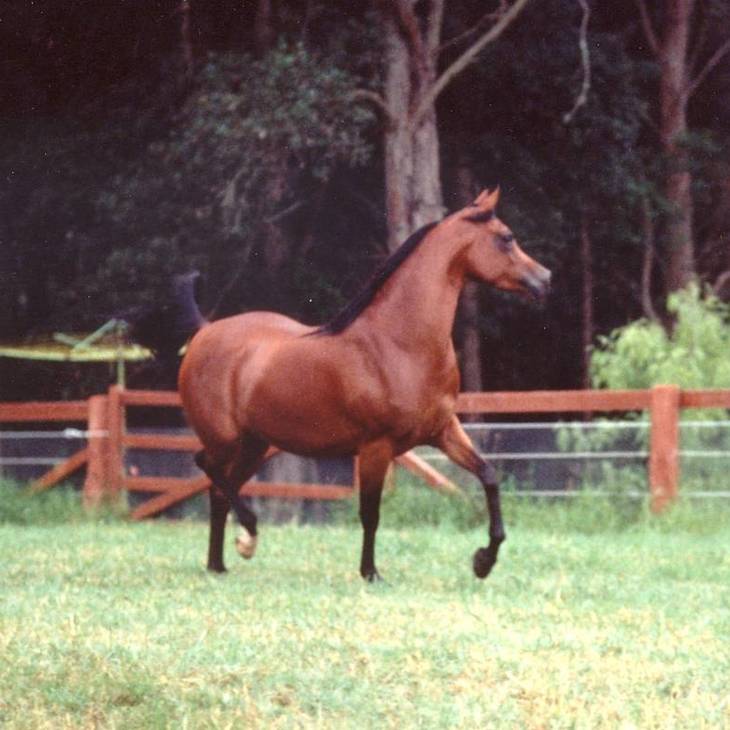 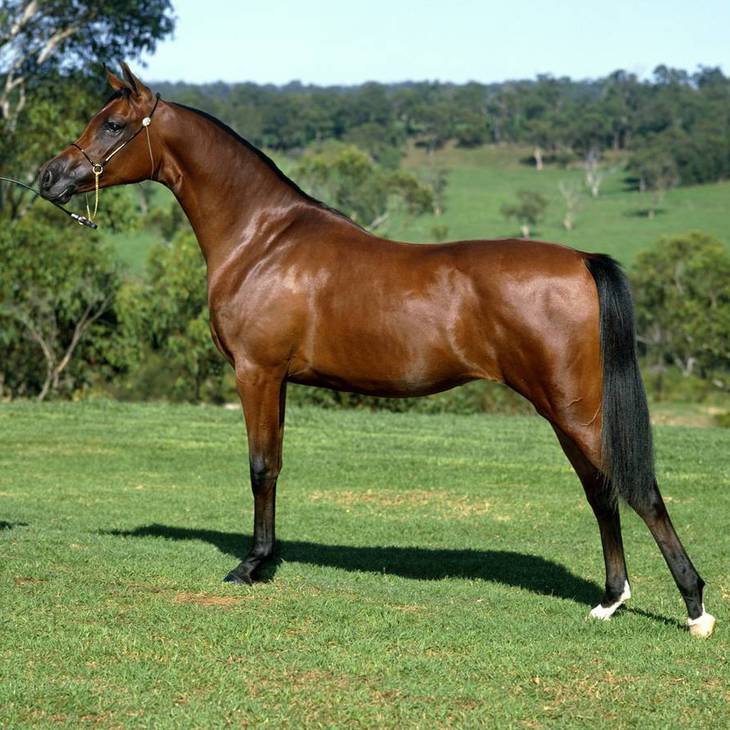 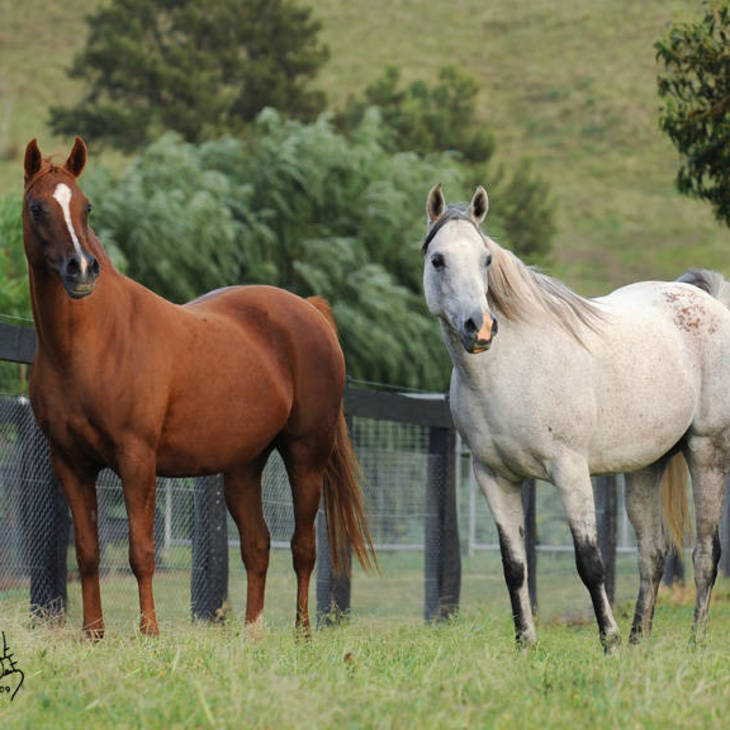 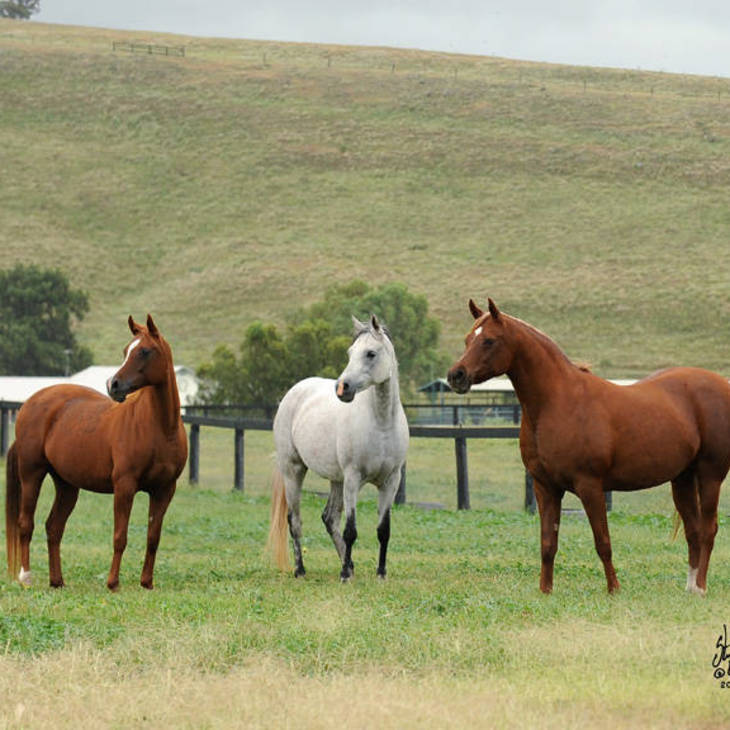 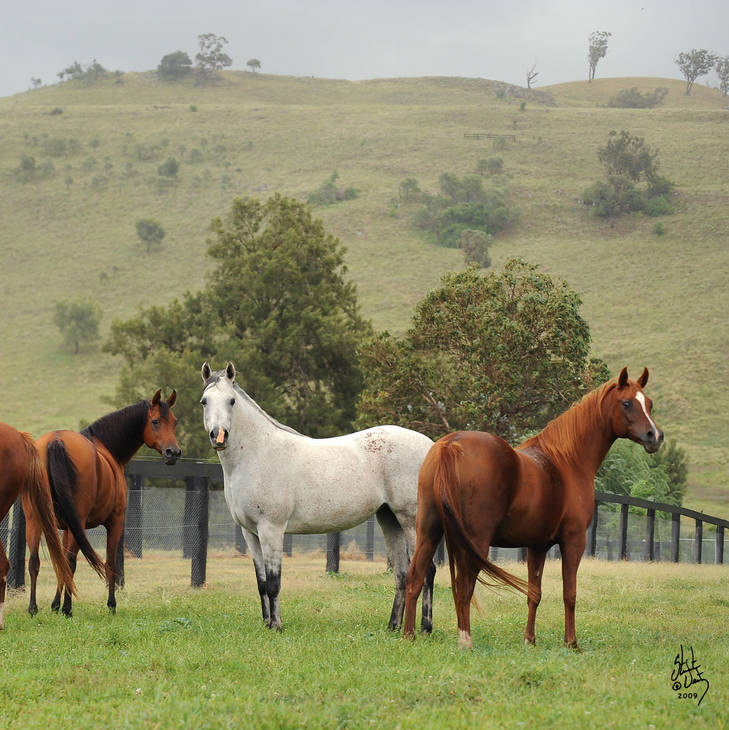 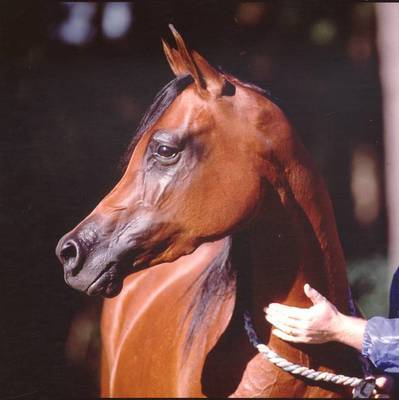 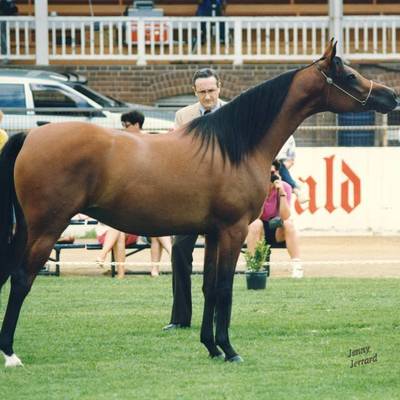 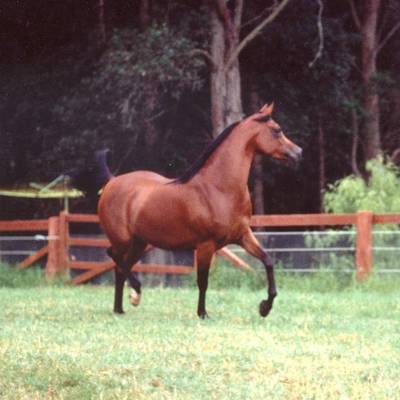 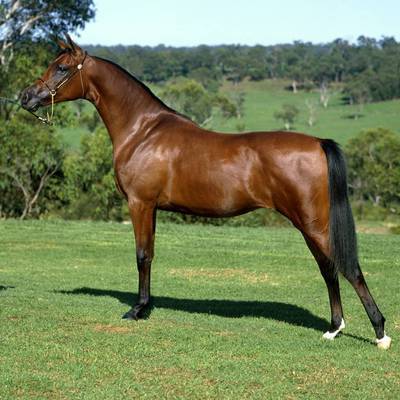 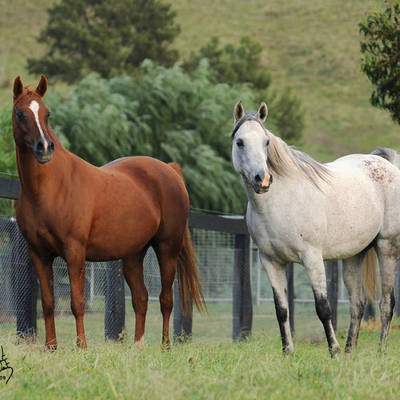 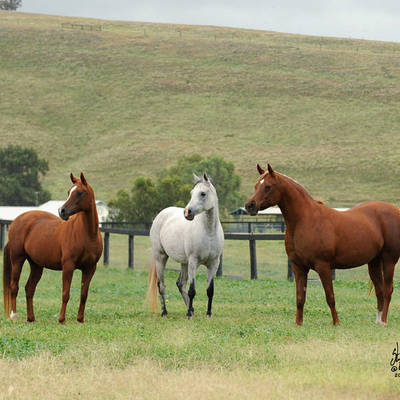 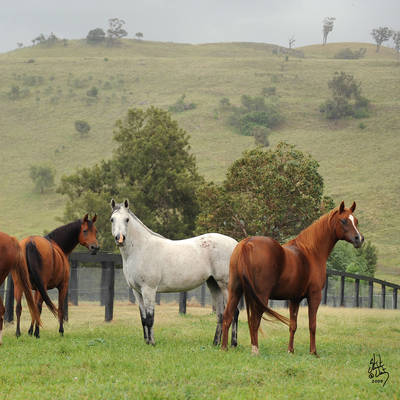 Foundress of the M ANGELIQUE Family

The Ascension of an Australian ANGEL

An Australian success story from beginning to end, the tale of Mulawa foundation mare M ANGELIQUE is one entrenched in the very foundation of Arabian horse activity on the continent. An intertwining of the ambition and efforts of many of Australia’s most successful and influential breeders and horsepeople, her modern-day tale of triumph is firmly established in the continental ideal of a creating the authentic Arabian comprised of an abundance of both beauty and utility.

The origins of her story began at a stud synonymous with profound Arabian horse impact and achievement in Australia on every level. The very first ancestor of M ANGELIQUE to arrive Down Under was the immensely important NASIRIEH (x Nisreen by Nureddin II), imported directly from the England in 1935 by Mrs. Dora Maclean for her seminal Fenwick Stud in Victoria. Bred by Lady Wentworth at the globally influential Crabbet Park from the renowned dam line of DAJANIA (or.ar.), NASIRIEH, a three-quarter sister to significant sire NASEEM, remained the only direct get of her immortal sire SKOWRONEK (Ibrahim x Jaskolka by Rymnik) ever to be imported to Australia. The grey NASIRIEH produced just one daughter by the Bonython import KATAF (Outlaw x Kateefah by Uns-El-Wujood): Fenwick’s very prolific chestnut KASSA in 1942. Bred to Colonial Foundation Stallion RIFFAL (Naufal x Razina by Rasim), another UK import to Fenwick bred by Lady Yule of all-Crabbet bloodlines renowned for his impressive size and structure, KASSA produced the bay KHALASA in 1950, the year in which the stud that was to be her eventual home was founded.

After just two generations, the torch of the Fenwick legacy of NASIRIEH descendants passed to Jean Luckock, celebrated breeder and champion of the Arabian sport horse, who purchased KHALASA as a foundation for her Ennerdale Stud. Mrs. Luckock wasted no time in producing foals from KHALASA, beginning with the bay LEILA in 1954 by the Fenwick-bred SIRHAN (Rashid II x Dahana by Raseel), double-descendant of the original Crabbet-bred Maclean import RAFINA, who traced directly tail-female to the incomparable desert-bred RODANIA. LEILA was subsequently bred to Ennerdale foundation stallion RAMI, another product of Fenwick Stud. A son of the Springmead pure Crabbet UK import RAKIB, RAMI was out of the royally bred RAFINA daughter RISSANI, a mare intensely line-bred to meritorious desert-bred matrons DAJANIA & RODANIA. The resulting bay filly born in 1961 was TAMARA, a fourth-generation Australian bred mare who would soon become a notable foundation dam for Paul & Ella James’ celebrated Arabian Park Stud in rural Sydney.

With the dissemination of the Crabbet bloodlines from both Fenwick & Ennerdale Studs to the bustling New South Wales of the 1960’s, the popularity and fame of the NASIRIEH descendants expanded exponentially. TAMARA’s first daughter was produced in 1966 for Arabian Park, sired by their enormously influential and universally admired foundation stallion BANDEROL, a son of Fenwick’s final UK import SINDH (Silver Vanity x Silfina by Indian Gold) and the beautiful BALSORA (Riffal x Badoura by Rakib). Uniquely, BALSORA traced directly tail-female through Dora Maclean’s important foundation mare BARADA II (Raisuli x Gadara by Harir) to the original import NAMUSA (Ahmar x Narghileh by Mesaoud), introduced by Australian Arabian horse founding father Sir James Boucaut in 1901 for his Quambi Stud in South Australia. This historically significant blending of the best of Australia’s foundation bloodlines resulted in the bay mare DIMITY, a mare whose influence through her Arabian Park & River Oak bred produce is acknowledged and admired around the world. Of her many prolific and prestigious descendants, multi-international champion mare EAGLERIDGE PASSIONATA (Sanadik El Shaklan x River Oak Dimity) ranks as one the most elite, winning hearts around the globe and serving as an auspicious ambassador for the Australian-bred Arabian.

Eager to prove the daughters of BANDEROL, Paul James put DIMITY to the test as a two-year old breeding her to the predominantly Crabbet-influenced IVAN (x Bellona by Silwan), a powerfully built son of respected sire SILVER MOONLIGHT (by Indian Magic), a son of the invaluable SILVER FIRE (Naseem x Somra by Daoud), owned by the Queensland Agricultural College. The resulting daughter, the chestnut ARABIAN PARK LADY CONSTANCE born in 1969, was in turn sold to Boland Family of Razina Park. She too was tested early, bred as a three-year old back to her maternal grandsire BANDEROL for her first foal, a bay filly aptly named ABANDA, to create a genetic powerhouse of nearly pure Crabbet bloodlines descended seven generations from foundation mare NASIRIEH.

When looking for the best Australian bred females with a celebrated heritage of success that best represented the ideal of classically beautiful as well as capably athletic and versatile Arabian, it was these sixth and seventh generations that would join the Farrell Family’s Mulawa Arabian Stud in the late 1970’s as foundation mares. The better of the broodmares when crossed with the imported Mulawa stallions proved to be the tightly-bred ABANDA. As an ideal outcross, she hit the jackpot with the Polish-Egyptian cross VISION (Jamil x Euni by Bandos), producing an exquisite bay filly in September 1986, elegant and refined, with an aristocratic femininity, exceptional quality of skin, harmonious proportion and natural athletic ability, all attributes predictably indicative of her esteemed heritage. Prophetically named M ANGELIQUE, the “M” designating the stud prefix at the time and the “ANGELIQUE” denoting her heavenly phenotype, she would go on to establish one of the most important dam families at Mulawa, creating in the process an entire legion of “Angels”. Nearly thirty years later, the resulting “ANGEL” legacy of descendants has consistently achieved global success as beautiful athletes of world-class caliber into the fourth, fifth and sixth generations.

The most recent addition to the trio of full siblings is a captivating chestnut colt named VANGELIS MI in keeping with the tradition of the “ANGEL” namesakes. Like VALENTINO’S ANGEL, VANGELIS also finished his yearling season undefeated as National Stud Show, East Coast & unanimous Australian National Champion, earning additional prestige as the highest scoring horse at the 2015 Australian National Championships.

The M ANGELIQUE family has also earned considerable prestige through the produce of her eldest daughter by TS AL MALIK: ON ANGELS WINGS (1998), a beloved chestnut mare so named as she was the result of Mulawa’s fist successful use of frozen semen from overseas. Having left two valuable daughters, the bay ANGELS LOVE MI (Gazal Al Shaqab) & the liver chestnut ANGELS GIFT MI (Magnum Forty Four), in the same year of her untimely death in 2009, ON ANGELS WINGS is best remembered on the Arabian show scene as the dam of three of the most successful Arabian saddle horses in Australian history: the “Wings Brothers” - Australian National Champions GOLD N WINGS (2002), SOVEREIGN WINGS (2004) and MULAWA BRONZE WINGS (2005). The FAME MAKER R son GOLD N WINGS can claim the titles of Australian National Champion Junior & Senior Stallion, as well as numerous Ridden Arabian Stallion Championships & Supreme Ridden Exhibit sashes at a multitude of major events around the country with owner Courtney Gibson in the saddle.

The masculine combination of M ANGELIQUE and TS AL MALIK has proven equally successful, readily apparent in multi-champion halter horse ASK and international endurance winner MULAWA ANGELUS. A two-time winner of the Sultan Mirzan Cup in consecutive years for owner Mr. Prutirat Rattanakul Serireongrith of Thailand, MULAWA ANGELUS earned third place finishes in French endurance meets at Fontainebleau & Pontonx sur l'Adour in 2014 prior to his most important debut on the international stage at the World Equestrian Games. From the 170 starting entries in the WEG Endurance Championships, MULAWA ANGELUS was amongst the 38 horses that crossed the finish line and passed the final vet check, finishing a most impressive 14th with a total riding time of 09:55:49. This victory for MULAWA ANGELUS, and subsequently for the Australian-bred Arabian, signified the most prestigious honours earned by a member of the dam family in the FEI-recognized sport of Endurance, expanding the worldwide influence of M ANGELIQUE to yet another inspiring level of achievement.

After blessing the Mulawa program and the Australian Arabian horse industry with dozens of remarkable descendants over two decades, M ANGELIQUE was sadly lost soon after the birth of her final foal in early 2009. Eight generations removed from foundation import NASIRIEH, M ANGELIQUE has subsequently expanded the influence of her illustrious heritage exponentially in the last quarter century to another six generations of unprecedented accomplishment and universal esteem. Faithfully representing the Australian ideal of the authentic Arabian horse endowed with the ultimate combination of exotic beauty and abundant athleticism, the legacy of M ANGELIQUE is a thriving testament to the trail-blazing, dedicated and visionary breeders who have masterfully contributed to the fourteen generations of this homegrown success story. Ever an Angel Ascending, the profound legacy of M ANGELIQUE lives on with ever-growing global influence, with many years of reward and celebration most certainly yet ahead for the benefit of the breed worldwide and for all of those who love and cherish the Arabian horse.